A team made up of members from the West Volusia Narcotics Task Force (WVNTF, a partnership between VSO and DeLand PD), the Volusia Bureau of Investigation (VBI, a Central Florida High-Intensity Drug Trafficking Area Initiative), the Deltona Narcotics Enforcement Team, VSO SWAT, and the Bureau of Alcohol, Tobacco, Firearms, and Explosives arrested 6 people and seized large amounts of drugs in two raids last week.

From the Volusia Sheriff's Office:

A pair of search warrants executed on 4/20/22 following narcotics investigations in DeLand and Deltona resulted in 6 arrests on charges including armed trafficking in meth, cocaine, and heroin, and the seizure of all of the above.

The raids at 647 E. Howry Ave. in DeLand and 2022 Jefferson Ave. in Deltona were conducted without incident. There were children present at the drug house in DeLand.

The main suspect at the DeLand house, 38-year-old Cory Robinson (DOB 11/28/1983), jumped out of a side kitchen window but was met by members of the VSO SWAT team and promptly taken into custody.

A 9-month-old child and a 14-year-old child were also on the property when units arrived. After getting them to safety, units recovered 30.7g crack cocaine, 24.2g powder cocaine, 17.1g heroin, 25.4g methamphetamine, 64 Alprazolam pills, a handgun, ammunition, and extended magazines in the house.

The children were released to other family members and the state Department of Children and Families was notified of the circumstances.

Robinson was arrested on about a dozen drug and weapons charges, child neglect, and his outstanding warrants, and transported to the Volusia County Branch Jail with no bond for child neglect and violation of probation. For the charges which do carry a bond amount, Robinson’s total bond is $1,581,000.

Also arrested at the DeLand house were:

• Derrick Soloman (DOB 11/21/94), charged with possession of cocaine with intent to distribute, possession of meth, and child neglect (no bond)

• Virgil “Floyd” Hillsman (DOB 11/23/1977) was arrested in a vehicle in the driveway and charged with sale and delivery of cocaine within 1,000 feet of a park, possession of crack cocaine, and tampering with evidence. His total bond is $57,500.

• Anthony “Tony” Martinez (DOB 8/21/1975), was located and arrested in a traffic stop by Deltona Crime Suppression Team deputies, and charged with sale and delivery of cocaine within 1,000 feet of a park, 2 counts of possession of drug paraphernalia, driving with a suspended license, failure to appear and violation of probation, which carries no bond. 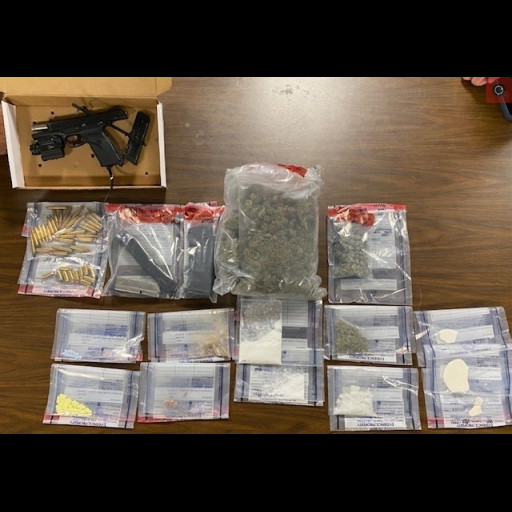