(DeLand, FL) – Police Chief Jason Umberger announced Friday the promotion of two officers to the rank of Captain as part of a reorganization of the police department.

Moon is a 28 year veteran of the DeLand Police Department. He has held a wide variety of positions and leadership within the agency during his long and distinguished career. For the past 10 years, Moon has commanded the Criminal Investigation Division comprised of one Sergeant, nine Detectives, and six civilian employees. He is responsible for all of the investigative services and processes within the division to include: persons/property crimes, financial crimes, sex crimes, and major case robbery/homicides, West Volusia Task Force, Volusia Bureau of Investigations, Victim services, and Evidence Unit. Prior to being promoted to the rank of Lieutenant, Moon served as a Sergeant for seven years in various assignments to include supervising criminal investigations, Patrol, Motors, DUI enforcement and Reserve officers.

He is a graduate of the prestigious FBI National Academy in Quantico, Virginia.

As captain of the Special Operations Bureau, Moon will oversee the Criminal Investigations Division, Evidence, Training, Hiring and Community Services.

Captain John Anderson is a 17 year veteran of the DeLand Police Department. He has also held various positions and ranks within the Police Department making him extremely well rounded. He is currently a Patrol Commander and supervises A Squad. He supervises a Sergeant, seven police officers and multiple civilian employees when he is on duty. Additional duties include accreditation, policy and procedure development, emergency operations center liaison and training instructor. Captain Anderson is a certified instructor in the following disciplines: General Instructor, Master Driving Instructor, Firearms Instructor, and a Stop Tech “Stop Sticks” Instructor.

Prior to his assignment as Lieutenant, he has served as a Sergeant in Community Services for two years and supervised the officers of this unit which were responsible for DARE, the Citizen Police Academy, Police Explorers, and Neighborhood Watch. He also served as the Department’s Accreditation Manager, developing policy and procedures, supported recruitment, officer candidate testing, background investigations, and hiring and training. Prior to this he served as a patrol Sergeant for two years and supervised six patrol officers and multiple civilian employees.

“Both are men of integrity,” said Police Chief Umberger. “In the short time I’ve been Chief of Police they have demonstrated through both word and deed that they will do the right thing for the right reasons regardless of the criticism they might receive for doing it. This is an absolute requirement for a Police Officer and especially a police leader. Pete and John – Congratulations on your promotion to the rank of Captain and thank you in advance for your leadership.” 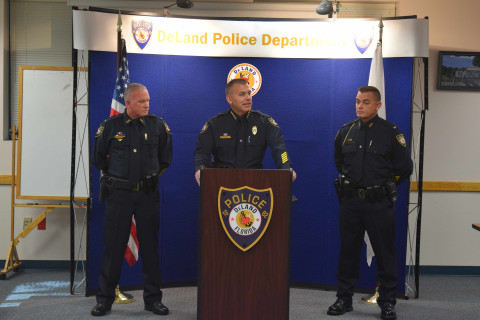 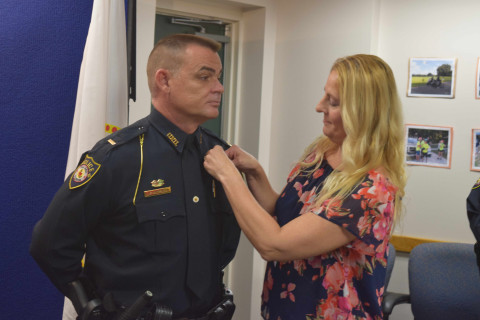 Captain John Anderson receiving his badge from his wife, Kim. 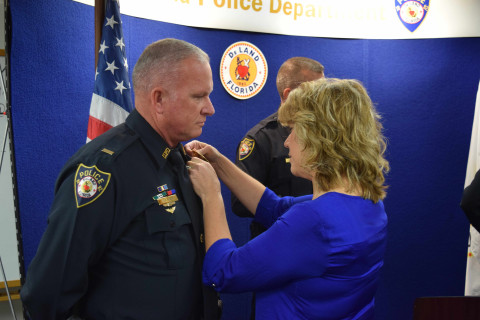 Captain Pete Moon receiving his badge from his wife, Linda. 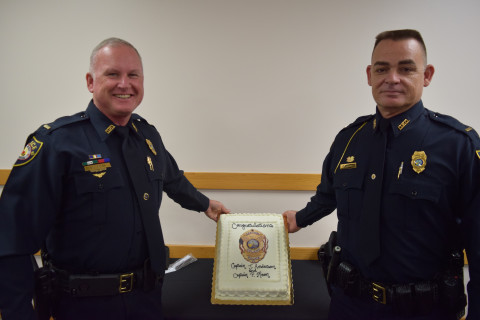 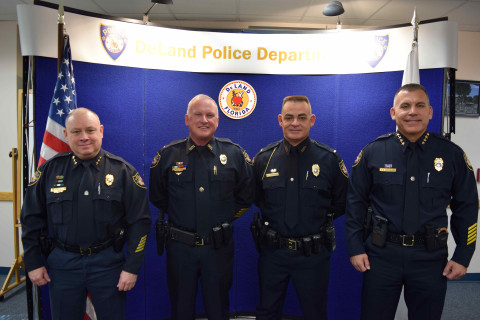 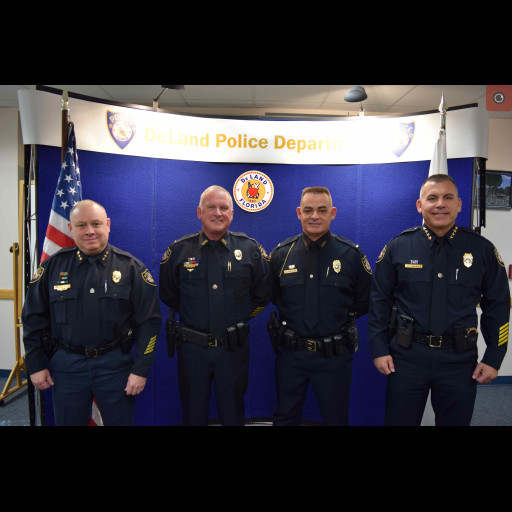